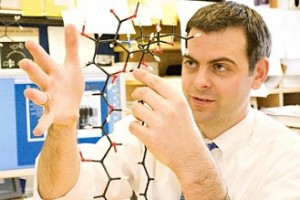 Marty is the recipient of a number of honors and awards, including the Thieme IUPAC Prize in Synthetic Organic Chemistry, the IOCF lectureship award, the Hirata Memorial Gold Medal from Japan, the Early Career Scientist Award from the Howard Hughes Medical Institute, the American Chemical Society Kavli Foundation Emerging Leader in Chemistry Lecturer, the American Chemical Society Elias J. Corey Award for Outstanding Original Contribution in Organic Synthesis by a Young Investigator, the American Chemical Society Arthur C. Cope Scholar Award, the UIUC Innovation Discovery Award, the Novartis Chemistry Lectureship, the Arnold and Mabel Beckman Foundation Young Investigator Award, a Sloan Foundation Research Fellowship, an NSF CAREER award, the Dreyfus Foundation New Faculty Award, the Bristol-Myers Squibb Unrestricted Research Grant in Synthetic Organic Chemistry, the Eli Lilly Grantee Award, the Amgen Young Investigator Award, the AstraZeneca Excellence in Chemistry Award, and he has been named “one of the world’s 35 top innovators under age 35” by Technology Review. He has also been recognized multiple times as a “Teacher Ranked as Excellent” by the UIUC Center for Teaching Excellence.

To view a free Chem. and Eng. News “Webinar” in which Marty describes the group’s research see:http://pubs.acs.org/cen/webinar/webinar-sigma.html

For a discussion with Marty on being a chemist and the prospect of molecular prosthetics, see:http://publications.nigms.nih.gov/chemhealth/chemist_burke.htm